Whether you’re a field-sport athlete or barbell athlete looking to improve your health/wellness, there are two key lower body movement patterns that you should be using to build endurance, strength, power, and full-body capacity. These patterns, plus their many variants, are the squat and the deadlift.

What is a Deadlift? The deadlift is a full body exercise which should be included into your clients' programming, using the variant that best fits their goals, abilities, and preference.

Escamilla et al. say: “The starting position for the deadlift is with the lifter in a squat position, arms straight and pointing down, and an alternating hand grip used to hold a bar positioned in front of the lifter’s feet.

According to the American Drug Free Powerlifting Association (ADFPA) rules at the time of this study, the barbell is "lifted upward in a continuous motion until the lifter is standing erect with knees locked and the shoulders thrust back.” In the set-up of the conventional deadlift, the lifter approaches the bar with their feet roughly hip width apart and hands grasping the bar outside of their knees. Feet are generally facing straight forward or slightly pointed away from each other (‘toed-out’). Either a double-overhand or alternating grip (one forearm pronated, the other supinated) can be used. In the sumo deadlift, the lifter approaches the bar with their feet much wider than the conventional deadlift (2-3x wider), commonly toed-out. The lifter grasps the bar with their hands inside of their knees. A double-overhand or alternating grip can be used here as well. With the hex-bar deadlift, a specialty barbell in the shape of a hexagon allows the lifter to stand inside of it. The lifter can then grasp either the ‘high-handles’ or ‘low-handles’ in a neutral forearm position on either side of their body.

With the conventional deadlift as a reference point, the vertical displacement of the bar from starting position to lift completion is 22% shorter in a high-handle hex-bar deadlift (1) and 20% shorter in a sumo deadlift (4). Therefore, a sumo or high-handle hex-bar deadlift will decrease the global range of motion requirements of the lift compared to the conventional deadlift.

In practice, this holds true in that the conventional deadlift typically feels more technically demanding to a novice lifter than the sumo or hex bar deadlift. Comparing the range of motion requirements at the starting position, or ‘lift-off’, both the sumo deadlift and hex bar deadlift will lead to a more upright torso compared to the conventional deadlift (3).

The hex bar deadlift starting position demonstrates increased knee flexion of ~6° compared to the starting position of the conventional deadlift, while the range of motion at the hip and ankle is similar between them (3).

The sumo deadlift has been shown to start with 10° decreased hip flexion and 4⁡° decreased ankle dorsiflexion compared to the conventional deadlift, but similar knee flexion angles when a 3-D analysis is utilized (4).

All three variants demonstrate some difference in bar path between starting position to lift completion, but generally are executed with the goal of a vertical bar path (2). At lift completion, the hip, knee, and trunk should be erect, with shoulders in resting anatomical position.

The hex bar deadlift demonstrated significantly greater normalized EMG values for the vastus lateralis (quadriceps) during both the eccentric (down-phase) and concentric (up-phase) phases, compared to the conventional deadlift.

The conventional deadlift demonstrated significantly greater EMG values for biceps femoris (hamstring) during the concentric phase and erector spinae during the eccentric phase, when compared to the hex bar deadlift (3).

Globally, it was demonstrated that both the conventional and sumo deadlift had higher excitation of quadriceps, tibialis anterior, hip adductor, gluteus maximus, L3 and T12 paraspinal, and middle trapezius during the portion of lift closer to the floor; and greater excitation of hamstrings, gastrocnemius, and upper trapezius activity during the portion of the lift closer to ‘lock-out.’ (5)

Wrapping Up the Differences: What Does it All Mean?

The results of these papers, overall, indicate that all three styles of deadlift are excellent for recruitment of posterior chain musculature, but provide some distinct differences.

The biggest difference between the lifts is increased quadriceps excitation during both the sumo deadlift and hex bar deadlift, compared to the conventional deadlift.

The conventional deadlift, on the other hand, demonstrates more overall hamstring (concentric) and erector spinae (eccentric) excitation, than the hex bar deadlift.

Other Considerations: Power, Force, and Velocity

When it comes to measures of power, force, and velocity, we also see some distinct differences between deadlift variations. For instance, the conventional deadlift demonstrated significantly more mechanical work than both the sumo and hex bar deadlift, due to the increased linear displacement from starting position to lift completion.

The conventional, sumo, and hexagonal bar deadlift are excellent options to incorporate within the program of both your performance and rehabilitation clients.

All three will load the entire body with an emphasis on posterior chain musculature, including the glutes, hamstrings, and paraspinals. The best option for your client is the variation that fits their goals, current abilities/tolerance, and preference.

Indications for the Conventional Deadlift:

Indications for the Sumo Deadlift:

Indications for the Hex Bar Deadlift: Exploring Posture and Deadlifts Through a Psychological Lens Today is a big day for Barbell Rehab, as we have our first guest article! This article was written by Read more

You Don't Need to Toe Touch to Deadlift Safely 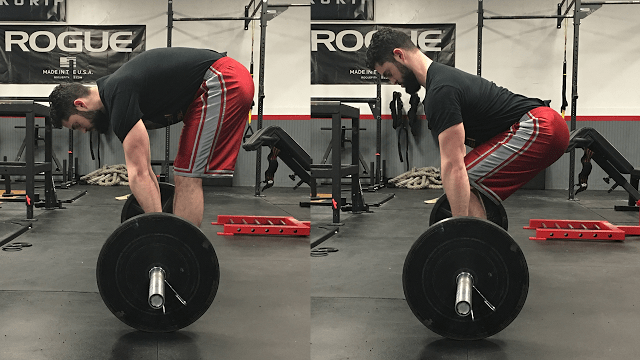 Recently, I became engaged in a discussion about utilizing the toe touch as a screen to safely perform the deadlift. Read more